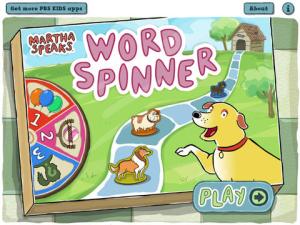 FREE for a limited time – Martha Speaks Word Spinner from PBS. Up to four players can play the six interactive games in this educational app. Each player selects a game piece (a favorite dog from the Martha Speaks television series). Players move on the board by completing games that build storytelling skills and oral vocabulary skills. In Bucket Ball, players catapult balls into moving buckets that illustrated with key vocabulary words. Name 5 Things asks players to name things that are part of a category. In Story Sounds, players have to tell a story that incorporates six silly sound effects. In Stuff Sort, kids sort through a huge pile of stuff looking for things that belong to a certain category. Who Am I? has players acting out occupations. And finally, Word Connector asks players to match pictures by making connections (for example artwork, money, clothing).
Martha Speaks is a PBS Kids series for children between the ages of four and seven. It is based on a delightful children’s book series by Susan Meddaugh. Martha, the beloved family dog, acquires the power of speech after eating some alphabet soup. What a fun premise for a story! Visit the series website at http://pbskids.org/martha/